You are here: Home > Membership Matters > Youngsters take over hospital as part of Takeover Challenge!

Youngsters take over hospital as part of Takeover Challenge!

Young people from Westfield Primary Community School in York took over the running of York Hospital recently, as part of the Children’s Commissioner’s Takeover Challenge.

The event gave young people the chance to 'takeover' parts of the hospital for the day. In doing so, they got to experience what it's like to be in a real work environment and take on important responsibilities.  The children also had the opportunity to ask questions about how decisions are made and understand the affect these decisions can have on young patients.

The 30 young people from the school spent the day taking  part in many activities, including an inspection of the Children’s Ward in order to feedback on how the trust can make the environment better for young patients.  They also learnt about different therapy techniques which included lessons on sign language and anatomy,  discovered more about healthier eating from the hospital dieticians and took a behind the scenes visit to A&E.

All the children received a hospital lunch, the same food that is served to children who are in hospital, and they were joined by Chief Executive, Patrick Crowley.  During lunch they had free rein to ask Patrick questions which ranged from wanting to know the best part of his job, how often he sees patients, what he would change about his job and why didn’t he wear a tie!

The project idea was developed by Jo Mannion, Consultant Paediatrician and Vicky Mulvana-Tuohy, Childrens Therapy Manager.  Jo explained:  “Takeover Challenge is a national event, led by the Children's Commissioner for England.  It offers children and young people the chance to work with adults and get involved in decision making.  It happens in November each year and the November 2016 event prompted us in child health to do something at our trust.  The fantastic AHP team had a similar idea so we joined forces and the end result has been fantastic.  Vicky has organized a superb day. 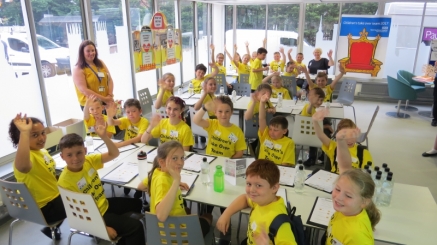 “The feedback the children have given us on our services and environment will be invaluable in making improvements for children, young people and families.

”Vicky adds:  “Giving children a voice and seeing everything through the eyes of a child is really important in helping us to make improvements.  “The children have brought so many fresh ideas, imagination and energy to the areas they visited - the Trust will certainly benefit from their fresh perspective.”

The children taking part in the challenge were selected via a school application process.  They had to explain why they should be chosen for the trip and what they hoped to benefit from it.  Many expressed an interest in a nursing career, whilst others wanted to come along so they could find out how to cure illnesses.  The children were asked for regular feedback during the day in order to capture their thoughts and ideas through creative sessions with the hospital’s children and young people therapy team, the arts team and the Trust’s patient experience lead.

Two of the lucky youngsters who took part were Caroline Kalucka and Oxana Bolshova, aged 11.  Commenting on what their three favourite things of the takeover challenge were, Caroline said: “My first favourite thing was the lunch as the food and service were both amazing.  I’ve also really enjoyed meeting the staff who have all been very lovely.  And thirdly, just being allowed to be in a hospital and see how departments work day-to-day.”

Some of the children will be coming back to the hospital this month to give feedback to the Trust Board about their findings.

Visit our Facebook page to view a pictures and video taken throughout the day.