New Nippy machines thanks to League of Friends 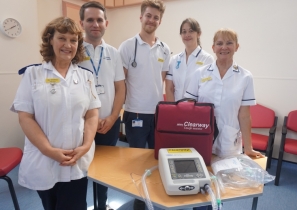 The two new NIPPY Clearway Cough Assistor Machines, which cost £7,000 in total, will help the Physiotherapy Team to provide respiratory care for patients on the acute wards and the Intensive Care Unit at Scarborough Hospital.

Ben Richardson, Advanced Clinical Specialist Respiratory Physiotherapist at Scarborough Hospital, explained: “The ‘NIPPY Clearway’ is a type of ventilator used by Physiotherapists and provides patients with a series of larger breaths in quickly followed by a cough out – this process is called mechanical insufflation-exsufflation.

“Mechanical insufflation-exsufflation machines are a recommended treatment by both the British Thoracic Society and The Association of Chartered Physiotherapists in Respiratory Care in delivering respiratory care for patients that are unable to cough and clear phlegm effectively. Not being able to clear phlegm can result in respiratory distress, pain, increasing levels of fatigue and potentially cause an acute deterioration in a patient’s medical condition.

“The type of patients which can benefit from treatment with mechanical insufflation-exsufflation are patients with Neurological Diseases such as Motor Neurone Disease, but also more acutely unwell patients whose cough has become weak due to an acutely deteriorating medical condition.”

These new ventilators will replace the hospital’s three old mechanical insufflation-exsufflation devices which have approached the end of their working life.

Ben continued: “On behalf of the team I would like to thank the League of Friends for their generosity. These two new machines will make a huge difference to our patients.”