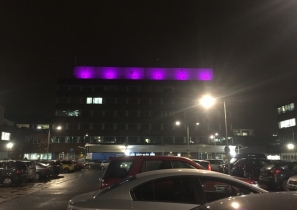 This is why upper gastrointestinal cancer specialist nurses at York Hospital and patient Jean Clark, who has locally advanced pancreatic cancer, want to raise awareness of the symptoms as many patients are diagnosed too late for treatment or effective surgery.

In its early stages, pancreatic cancer doesn’t always show symptoms, but the following symptoms can occur:

Jean’s symptoms included lower back pain and the constant feeling of being full (as her pancreas was pressing on her stomach). After she was diagnosed she had chemotherapy in York Hospital and then went to Leeds for chemoradiotherapy.

Specialist nurse Eden Galang, explained: “Jean’s cancer is inoperable because of its location in the pancreas, however her treatment was successful and it has now shrunk enough that it can be kept under control. She has finished her radiotherapy and only has to attend York Hospital every five months for a check-up and on-going support.”

Jean said that her treatment has been excellent and she can’t fault it: “Doctor Ornella Belvedere made me understand that even though my white blood cells weren’t multiplying, it wasn’t my fault or anything I was doing wrong. She and Eden Galang, the specialist nurse, were always truthful; they supported me and were always on hand for me to speak to.

“My treatment was seven hours long each time and even though the staff had other patients to look after, they were so attentive and all made me feel like I was their only one. They were brilliant.”

Following Jean’s treatment, she’s thrown herself into fundraising and raising awareness of pancreatic cancer around the city of York. During November she arranged for Bell’s Café in York to light up purple for six days. She and her family and friends also had a bucket collection and gave out information leaflets, purple glow sticks, ribbons and balloons at the fountain on Parliament Street. From these two events and holding a coffee morning where she lives, she’s raised over £475 so far for Pancreatic Cancer UK.

In addition to Jean’s efforts, the specialist nurses at York Hospital have displayed information and advice on the stand in the entrance to York Hospital this week and the last week of November for people to find out more. 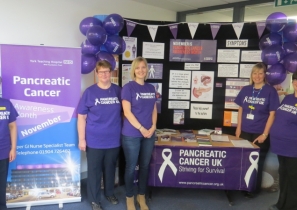